Thoughts On 'God Made a Farmer'

The new Dodge Ram commercial sure is getting a lot of play for its tribute to farmers. Apparently, the company has plans to make 2013 the "Year of the Farmer." Certainly we don't need a truck company to tell us that the work ethics and integrity of farmers are to be admired. Yet, I have to admit, a little highly produced media to sway the public in caring about people that produce their food for a few minutes certainly isn't a terrible thing. 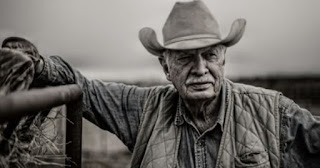 Regardless, Dodge missed a great opportunity to provide a contemporary view of the American farm.  They were going for nostalgia and heart strings here - and they nailed it. Even so, they could have been more accurate by showing more farmworkers, more women, more minorities, and any one of the emerging young farmers featured on this site. Yes, old white men make up the majority of primary farm owners in this country, but that's only because the Ag Census, only started counting secondary farm operators - such as women - in 2002. (Here's where you guffaw.) For all intents and purposes, this revised iteration of the commercial does a better job in the inclusion of farmworkers, yet still misses out on representing other farmer demographics. After all, it's going to take more than just 2.2 million farmers in this country to grow this country local and sustainable food.


The beauty of this piece did silence the room I was sitting in when it aired. So, all the criticism flailing around should be taken with a grain of corn. After all, it is a commercial designed to sell more trucks. And with the power of this trope over our hearts and minds, this could make this year Dodge Ram's best year. Ever.

God Made a Farmer

And on the eighth day, God looked down on his planned paradise and said, "I need a caretaker." So God made a farmer.

God said, "I need somebody willing to get up before dawn, milk cows, work all day in the field, milk cows again, eat supper, then go to town and stay past midnight at a meeting of the school board." So God made a farmer.

God said, "I need somebody willing to sit up all night with a newborn colt and watch it die, then dry his eyes and say,'Maybe next year,' I need somebody who can shape an ax handle from an ash tree, shoe a horse with hunk of car tire, who can make a harness out hay wire, feed sacks and shoe scraps. Who, during planting time and harvest season will finish his 40-hour week by Tuesday noon and then, paining from tractor back, put in another 72 hours." So God made the farmer.

God said, "I need somebody strong enough to clear trees and heave bales, yet gentle enough to yean lambs and wean pigs and tend the pink-comb pullets, who will stop his mower for an hour to splint the leg of a meadowlark."

It had to be somebody who'd plow deep and straight and not cut corners. Somebody to seed, weed, feed, breed, and brake, and disk, and plow, and plant, and tie the fleece and strain the milk, . Somebody who'd bale a family together with the soft, strong bonds of sharing, who would laugh, and then sigh and then reply with smiling eyes when his son says that he wants to spend his life doing what Dad does. "So God made a farmer."